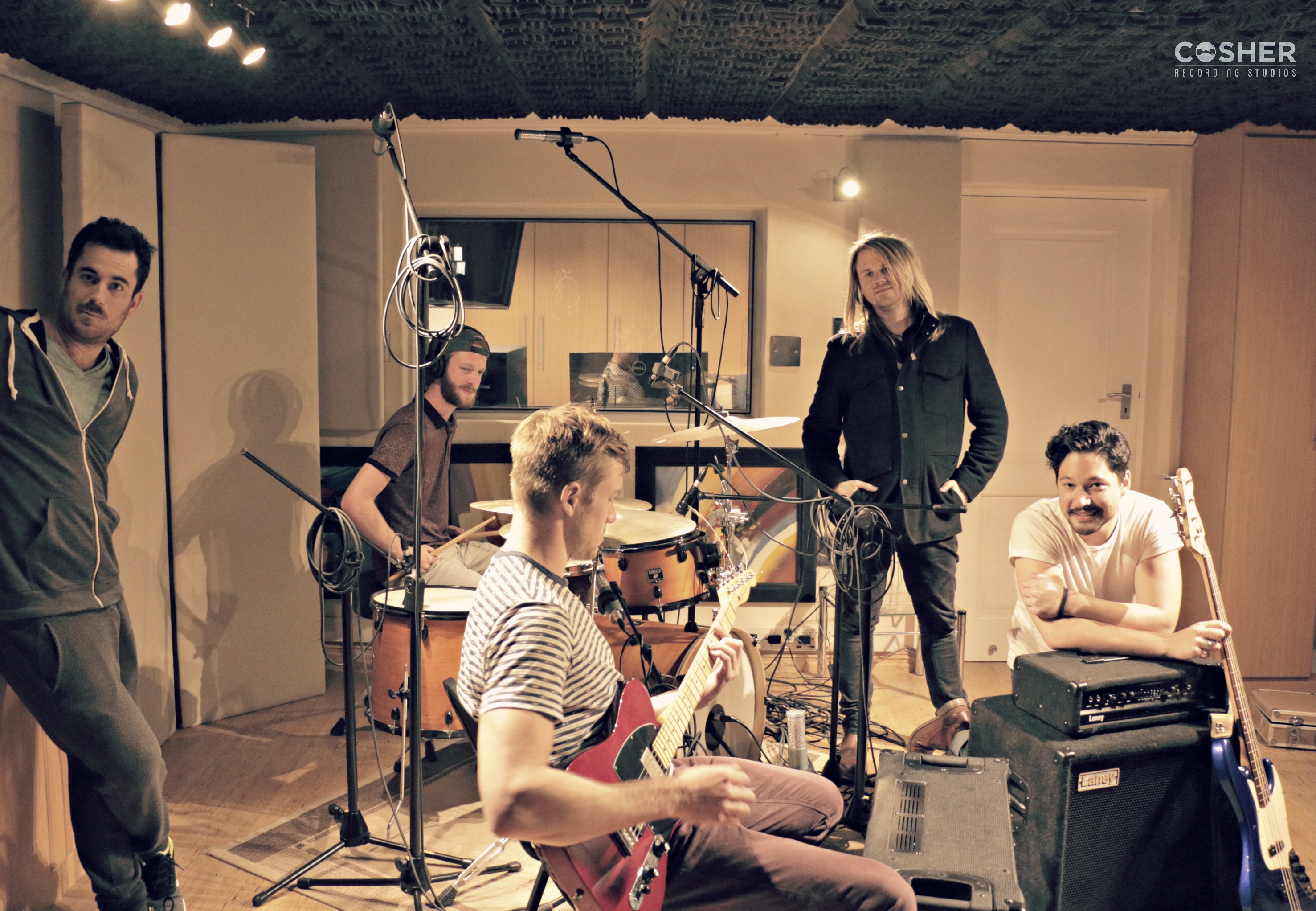 Dum Chang have been making waves through South Africa recently. The indie/alternative/rock band burst onto the scene with the release of their first EP which was recorded at Cosher Recording Studios in Cape town. Their first single off the EP called Panther has already been a success with the likes of 5FM and other big radio stations play listing the track.

Their description on their Facebook Page, sums them up perfectly:

“A Dum-Chang song is like a pizza.
If it’s good, it’s great.
If it’s bad, it’s still pretty damn decent.

5 guys. 4 instruments. 2 Josh’s and 1 hell of a rip-roaring sound. Dum-Chang promises to keep you on your toes, dancing to some sweet tunes and headbanging to some rocking riffs.

You never know what to expect, other than an endless ball of energy vibing from the stage, as we abuse our instruments and vocal chords to give you satisfaction musically and visually and a guaranteed great time”

And we can can attest to that through their recordings at the studio. Below is a summary of the band’s recording process. Jonny Dose’ was the head producer and engineer for the project and was assisted by executive producer Cosher.

Jonny and the team at Cosher Studios spent some time setting up the mics for the drums. A lot of time was spent on the setup of the drums as it’s an important aspect in a band’s recording and every single detail, such as mic placement, needed to be perfect. They used Tul t12’s on the over head mics and placed them high above the kit for more air. On the close mics, a Sm57 on the top snare and a Audix i5 on the bottom snare were used. Additionally, the Audix D2 and D4 mics were used on the toms.  A Audix D6 mic was placed inside the kick drum while the Tul Fed 47 closely Mic’d the outside of the kick for extra low end. Additionally, a pair of Fed 47 room mics and an omni mic, used as  a mono room mic, were used and added a unique character to the sound of the drum kit. After many different tests of mics and mic techniques, the producers and sound engineers were finally ready to record the drums.

For the tracking of the guitars and bass, the producers and engineers again, spent a bit of time  crafting and getting the guitars sounding great.  The Tul G12 mics were used on both the Backstair Ht100 and the peavey Valve king amps. The bass amp, which was a laney Head and cab, sounded great and made a huge difference to the overall sound of the tracks.  A Tul Fed 47 was used to capture the low end and a SM57 to capture the gritty top. They ended up tracking 2 instruments simultaneously as that can be done at Cosher Recording Studios in Cape town. Dum Chang were also very well prepared and this process saved the engineers time for the final production elements and for mixing and mastering.

They continued tracking the guitars and bass during the next session and the producers discovered that Tanner, one of the guitarists, was a seriously talented piano player. Tanner worked with Jonny to craft  and record piano for 3 of the songs.  The addition of piano/keys was a great success as it really took the songs to the next level.  Recording the vocals also took place and Cosher, who specialises in vocal production, assisted Jonny in this aspect of the project.

Lastly, the producers and engineers of the project did touch ups, edits, some more vocal production and started mixing and mastering the EP.

It was an incredibly fun and challenging project as everyone involved, continuously tried to take everything to the next level, and this was clearly evident in the final product.

Well done to Jonny Dose’, Cosher and the members of Dum Chang. We can’t wait to record their future work at Cosher Recording Studios 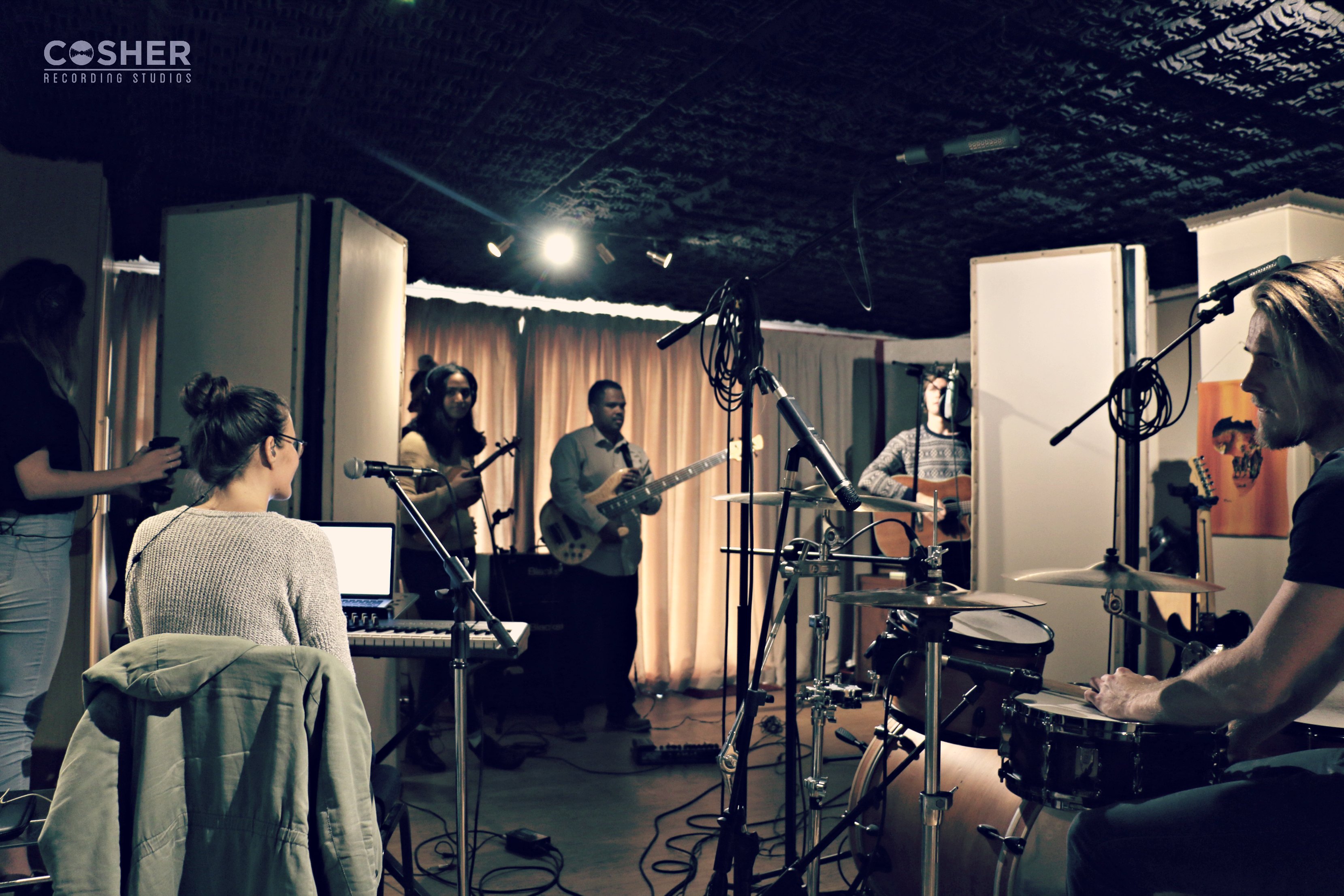